So COVID-19 didn’t actually boost e-commerce for the long term after all. Amazon‘s fourth-quarter and full-year results for 2021 reveal a calming of the commerce frenzy. 2020 was an extraordinary year for e-commerce as we were all shopping out of desperate need and fear. Or did we perhaps shop online to drown our miserable lockdown condition?

The pandemic e-commerce boost has been depicted as a horde of virgin e-shoppers hitting the internet. But once the world came out of strict isolation, the high growth rates dropped. What now appears as disappointing Q4 e-commerce sales compared to 2020, is probably just compensation for the temporary hypergrowth we experienced. Perhaps things will return to a “normal” scenario of 20% growth per year. 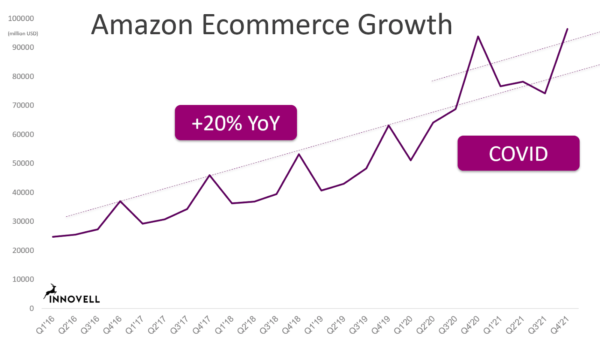 2021 was clearly a challenging year for Amazon. Radical changes in demand and the difficulty organising work during the pandemic have had long-lasting consequences. Hey, you can’t work from home if you are driving a delivery truck, can you? The global shipping system went into a deadlock. Prices of raw materials and delivery increased for many merchants, restocking was slower. There was perhaps less of a push to Q4 promotions than we are used to. We were expecting what some called a Shipaggedon – a complete breakdown of the supply chain – but in the end, there was little catastrophe, things were simply slower.

In the last quarter of 2021, Amazon net income growth was only 3% in a year-over-year (YoY) comparison with Q4 of 2020. We have become used to much higher figures. Digging a bit deeper, it becomes apparent that Amazon’s own e-commerce actually retracted by 1% whereas the marketplace of third-party sellers grew by 11%. For Amazon’s e-commerce operations, Q4 was clearly not good. But there were some other highlights worth having a look at. Let’s explore some of the ways in which Amazon’s operations and income is skewed to certain activities.

Income statements are rarely an interesting read, but often reflect business strategies or underlying structures. In the case of Amazon, the reporting of its activities into three categories is interesting at the very least. First there is North America, then there is International – I like to call that ROW, rest of world – and finally there is the wonder child, AWS (Amazon Web Services), the cloud computing branch. North America is 60% of Amazon, but excluding AWS, it sums up to two thirds of commerce-related activities. Amazon may be going global, but it is still very North-Amercia-heavy. The US market is followed by Germany, UK and Japan representing approximately 20% followed by a long-tail of 15-20 more e-commerce markets (Top 10 Amazon Markets, Innovell).

Interestingly, both North America and International generated a loss in Q4 of 2021. In the meantime, the cloud computing branch more than made up for those losses. From a historical perspective, Amazon operated with losses for many years until it was ready to turn a profit, so in itself, that is not problematic. In this case, however, it doesn’t look like things quite turned out the way they were planned in Q4.

International operations are in the red

The figures look much worse looking at International, but in reality they are more understandable too. Amazon e-commerce opened new activity in Egypt, Poland, Sweden and expanded activities in the UK and in the Netherlands. It is unlikely that any of these activites are even close to break-even. With the bulk of the loss arriving in Q4 as seen above, market conditions were probably not what Amazon expected for the end of the year 2021. Even with new market openings and an expanding offering, the International revenue retracted slightly in Q4 compared to the year before.

Amazon Web Services represented 13% of all Amazon activity and 75% of profits in 2021.

Amazon Web Services, AWS, the cloud computing brand of Amazon has been one of the growth drivers for a number of years. In 2021 it represented 13% of all Amazon activity and 75% of profits in 2021. Wow.

In parallel, it could be argued that the cloud computing offer is not Amazon’s core business despite delivering such a great performance. In any case, that performance has come to good use in pandemic times.

Amazon Ads is finally in the spotlight

Besides AWS, the other shining star is Amazon Ads. Now that it represents 7% of Amazon revenues, it finally has its’ own line item in the quarterly reports. Hitherto, it was buried in the “Other” category of which it represented over 90% and generated all the growth. Being shown separately in the quarterly reports gives Amazon Ads the spotlight it deserves. It grew by a massive 60% in 2021 as compared to the full year of 2020. Amazon Ads are placed on top of the shopping experience now referred to as “retail media“. From a growth perspective, it benefits from three different elements. Firstly the growth of its media: when Amazon e-commerce grows, the ad inventory automatically increases. Secondly, it benefits from a rise in competition. The advertising offer is based on the auction model and advertisers are flocking to Amazon Ads, which means the auctions rise. Price per ad unit grows continuously. And finally, the ad offering is expanding to more placements both within and outside of Amazon. All in all, this has helped Amazon Ads grow at a rate that has been in the range of 20-80% higher than Amazon e-commerce for the past years.

Despite a rough Q4 for Amazon, the company is still the biggest source of innovation in retail. 2021 saw the launch of “Amazon Style”, its first-ever physical store for apparel to open in Los Angeles. Amazon Style uses artificial intelligence to make recommendations to customers entering the shop.

It also launched a Starbucks Pickup with an Amazon Go store in New York City, pushing the concept of contactless payment into yet another business area.  And the “Just Walk Out” technology was pushed out to retail outlets outside of Amazon itself, such as the UK grocer Sainsbury’s smartShop “Pick & Go” in London.

In parallel, Amazon has reported having free same-day delivery available in over 90 urban areas in the US, 58 in Europe and also in Tokyo, Japan. This is a long-term competitive advantage that should maintain Amazon at the very top of retail for years to come.

2021 also saw Live Commerce come to life. TV Shopping is back on our screens. Although the usage is believed to be quite limited, it is an important attempt at social commerce from Amazon. Add the follow buttons and social posts it has enabled in its’ US marketplace, and it looks like Amazon is adopting social mechanisms from Facebook. In the meantime, Facebook redefined its’ business to Meta and lost quite a bit of stock value after the Q4 reports came out. The third giant, Google, who met its first ever negative growth figures during lockdown in 2020 has since recovered spectacularly and is very much the locomotive of internet advertising.

Amazon is actually catching up on that locomotive, but it is still far behind the search giant and needs the return of growth of e-commerce, its media, if it wants to catch up, and from that perspective, Q4 was the big disappointment. 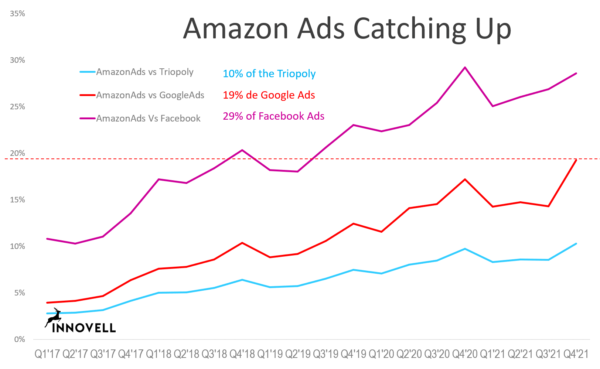 The only big surprise in the Amazon equation in this beginning of 2022 is this: it is AWS that makes all the money, not the core business of e-commerce. The company may be the innovator in all things retail, the future of logistics and a strong contender in social commerce. But in 2021 it was its cloud computing that drove it forward, and investments in international expansion and in the future of retail have yet to pay off.

This doesn’t make Amazon any less fascinating, and we are bound to hear much more about international expansion, retail innovation and the rise of retail media in 2022.

If you want to find out more about Retail Media, get in touch with Lengow’s team:

Anders is the founder of Innovell, a provider of Digital Marketing Insights. Digital marketing strategist, writer, entrepreneur, he is a frequent speaker on search engine marketing and Amazon marketing, as well as a judge on various industry awards in the area of search marketing, social media marketing and content marketing. He is also a mentor and a board director of the Paid Search Association.