Google Shopping News: “buy button” is about to come

After Facebook, Amazon and Pinterest already released a “buy button”,  Google is the next to add the button to its mobile search ads. 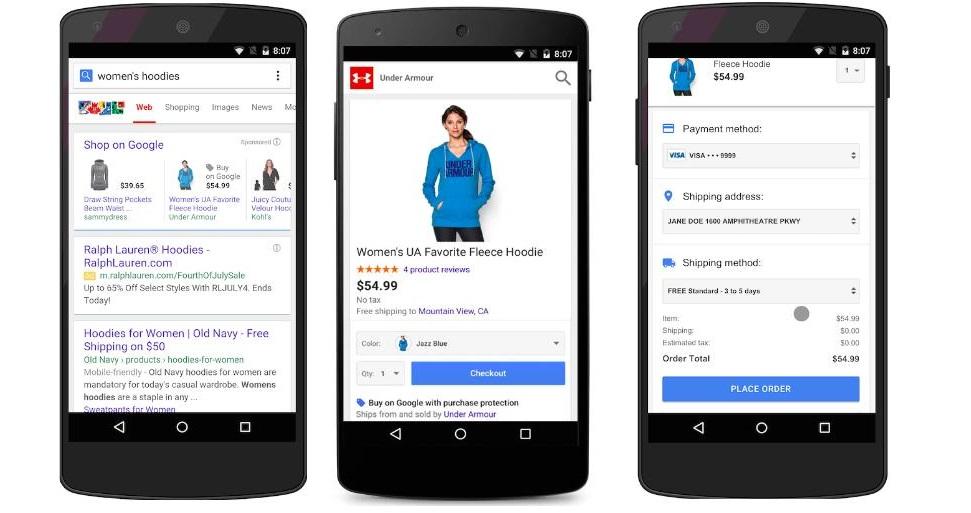 Google announced a new feature called “Purchases on Google,” which allows shopper to buy items directly from mobile search ads. This feature which was just a rumour last december is now becoming reality. Google is currently testing this new feature with a few retailers in the United States.

The search engine Google announced a few weeks ago that the new “buy button” will be integrated on the mobile version of the platform. Google decided for the time being to add this “buy button” only on the mobile phones as the company wants to support actively the mobile purchase process. The mcommerce sector is expected to grow to $638 billion US until the end of 2018. Google wants to simplify the shopping experience of the shoppers and accelerate the buying process.

The new feature is called “Purchases on Google” and will be displayed in the search results on mobile devices (mobile phones and tablets) not far from the sponsored links. The new “buy button” will not only simplify the shopping experience of buyers but further encourage shoppers to order directly through Google Shopping without leaving the platform. Truly a step forward for Google to strengthen its presence in the ecommerce sector.

Luckily the new “buy button” doesn’t include any extra costs for sellers.

Features of “Purchases on Google”

Once Shoppers are searching on Google through a mobile device they get products recommended according to their search request. Within one click on the product the shoppers will be directed to finalise the purchase. Continuing from this site it takes the shopper three clicks to finalse the purchase including choosing payment and delivery options. The logistics lie within the responability of the seller. Even if shoppers won’t be directed to the sellers online shop, retailers still have the opportunity to include their company logo on the Google shopping page.

Google wants to be able to trace all steps in the purchasing process and make sure that shoppers stay as long as possible on the platform. Once the “buy button” is integrated, Google will dive into a new dimension of the Google Shopping platform. One of the objectives of Google is still to create more traffic on the ecommerce sites of retailers. However through this new feature Google will be able to generate orders and operate as a market place. Once the test phase has been successfully completed Google expects the “buy button” to go online at the end of 2015 or early 2016.

Google Shopping : 6 feeds to use for your Shopping ads