It’s no secret that the second screen phenomenon (i.e. people often looking at mobile device screens while watching television screens) has created challenges and opportunities for marketers. The way that people use their smartphones and tablets while watching TV, particularly at night, has prompted advertisers to launch Multiscreen campaigns (using hashtags in TV ads to engage Twitter users, creating complementary mobile apps for TV shows, etc.).

Yet one of the most interesting recent trends has been the way people are now no longer only shopping from the comfort of their homes: mobile devices are now playing a bigger role in shopping decisions made in physical stores. As seen in this related article on the Lengow Blog last week, Google France Managing Director Nick Leeder pointed out that one in three shoppers prefer using their trusty smartphones to find information while shopping in stores instead of depending on store employees. 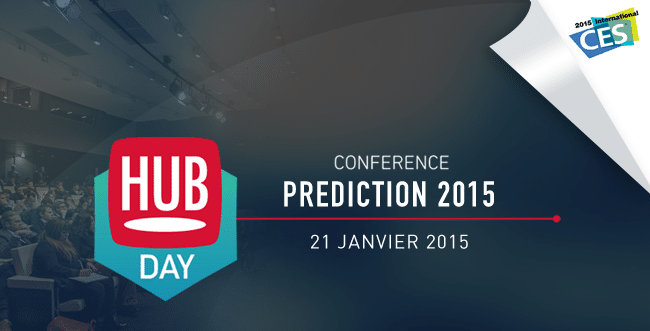 Leeder and other experts shared even more interesting statistics and insight on January 21 at the HUB Institute’s HUB Day Prediction Conference in Paris. After looking at the research done by Leeder’s team, it is safe to say that mobile commerce will continue to grow in 2015.

Industry analysts (including Google and other leading companies in the online shopping ecosystem) will continue sharing statistics on mobile commerce in the coming days in Paris: tomorrow at Mobile Marketing Association France’s conference tomorrow (which can be followed on Twitter via the hashtag #MMAFP) and next week at HUB Institute’s annual Future of Retail HUB Day Conference on February 5. The latter will also use the #HUBDAY hashtag that the HUB Institute used during its Prediction Conference: a hashtag that was the number one Trending Topic on Twitter in France at one point during the event.

Leeder’s keynote last week took a close look at specific markets in addition to sharing general information on the state of search in 2015. One of the standout statistics he shared was a quarter of searches on Google are currently done on mobile devices—five times its amount in 2012.

Leeder also focused on data pertaining to the European market.

One of the most convincing arguments in regards to the importance of mobile commerce was Leeder’s revelation that mobile search is the most popular type of search in Asia (a region previously covered on the Lengow Blog at bit.ly/ChinaEtail).

Leeder’s presentation ended with a point that effectively summed up how brands who don’t invest in a mobile strategy are stunting their own growth.

HUB Institute Co-Founder Emmanuel Vivier added that companies need to look at mobile as a priority and not simply as an option.

Vivier also announced that his team’s annual HUB Forum in Paris, which gathers members of industries such as marketing and retail, will be held on October 5-6.

One of the other critical pieces of advice shared during the half-day event revolved around how personalization and omnichannel are expected to play even bigger roles in online retail in 2015. These insights were shared by McKinsey Global Institute Chairman Eric Labaye, who delivered one of the better presentations of the half-day conference.

Let us know how you are planning to transform your online strategy in 2015 in the comments section below.

Save time on SEA with Google Dynamic Search Ads and Lengow