LeWeb has been one of the leading internet and technology-centric events in Europe and the world over for several years now. What’s exciting about the latest edition taking place in Paris from December 9-11 is the fact that some of the most creative members of the ecommerce community will be sharing their thoughts onstage.

Roxanne Varza of Microsoft Ventures and Girls in Tech—in her role as curator of LeWeb 2014’s Ecommerce trend—selected all of the speakers and shared a preview of what to expect on October 3 in Paris at LeWeb’s Startup Tour that took place at BPI France. 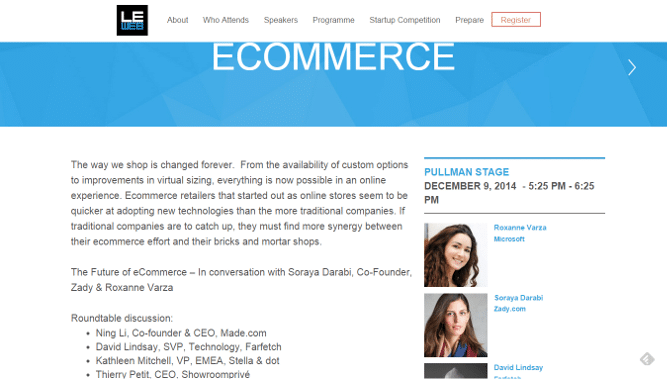 LeWeb’s ecommerce discussions on December 9 will feature notable startup founders like the New York City-based Soraya Darabi, who launched the ethical shopping site Zady.com for conscious consumers (a topic covered on the Lengow Blog last week) in August 2013.  The CEOs of Made.com, which is a member of Tech City UK’s “Future Fifty” (and was recently promoted by Lengow via Twitter) and France’s Showroomprivé are just a few of the other stellar speakers.

In addition to the panels, 17 startups who participated in the LeWeb Startup Tour (promoted on Twitter via #StartupTour) in various European cities will pitch at LeWeb, including standouts in fashion ecommerce (EasySize and Fitle) and online advertising (Sublime Skinz). An overview of this event—the first of its kind in LeWeb history—can be found at bit.ly/RoxanneVarzaLeWeb.

In anticipation of LeWeb, Varza interviewed some of Paris’ own ecommerce heavyweights to find out the latest industry developments.

Some of the highlights included analysis of the subscription commerce model (i.e. subcom, which was recently explored in great detail by the Parisian digital think tank HUB Institute) and ecommerce’s potential on mobile platforms (i.e. mCommerce) by Alven Capital Partner Nicolas Celier. Alven Capital, one of the early investors in Lengow, has consistently invested in other innovative ecommerce startups, such as the subcom startup JolieBox which eventually became a part of Birchbox. However, Celier pointed out that there is still so much potential for mCommerce and said he expects that mobile-only startups will transform ecommerce soon.

Sharing the stage with Varza and Celier were Tatiana Jama and Lara Rouyres, the co-founders of Selectionnist, one of the most creative additions to the ecommerce world this year. Selectionnist allows for magazine readers to easily buy products they find in magazine advertisements and recently debuted its mobile application at the Rude Baguette’s Paris Founders Event on October 8. The two former lawyers and 50 Partners members, who previously created another ecommerce venture together (Dealissime, which later became Living Social France) encouraged ecommerce merchants to constantly test and measure their marketing tactics and to implement cross-channel strategies to reach larger audiences.

Photos and quotes from all of the aforementioned speakers, as well as some of LeWeb’s organizers and hosts (Benjamin Costantini and Rodrigo Barros) were shared on the Lengow UK Twitter feed and are included below.

As 2014 comes to a close, feel free to review some of growing trends of the past year covered on the Lengow Blog (Bitcoins and Inbound Marketing) as well as social networks to look out for in 2015.

You can buy items in magazine ads via our #app launched at @RudeBaguette #PFE (http://t.co/ec5LBEuJnZ)-@Selectionnist pic.twitter.com/SnWrqalDdu