UX now dominates the digital world and is incorporated in the majority of website and app projects. The idea of an app designed without a UX or UI designer is now unimaginable. Something that seemed somewhat unnecessary or superfluous just 5 years ago has become unavoidable in 2017.

Just like every other domain, UX has several methodologies and trends. However, when it comes to the foundations of interface design, it is worth knowing about some of the more abstract methods that are strongly linked to project design and can be put in place to create a positive user experience. This is more worthwhile than simply following some tricks that may not guarantee the true interface capacities and experiences that you would like to constantly offer to your users. 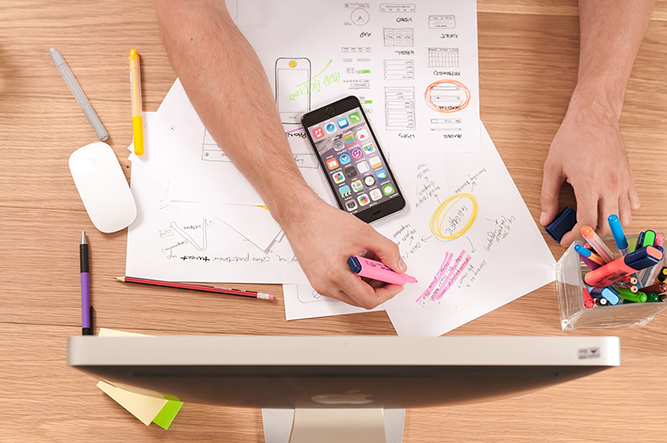 To find out more, we asked Olivier Sauvage, aka Capitaine Commerce, founder of the Wexperience agency that specialises in UX, to contribute his expertise on the subject.

Design Thinking is the Holy Grail of digital evolution

A virtually unknown term just two years ago, Design Thinking is making its revolution. It’s impossible not to talk about it and discuss the wealth of ideas it provides, along with its ability to challenge teams and create user-tailored products.

As a set of techniques and methods, it unifies and brings together ressources and modifies them to meet user needs. This is often used in organisations like Voyages-SNCF, as it proves to be a sustainable way to generate creativity and to adapt to an audience of web or app users.

Usability testing has long been a part of the UX Designer’s process. Simple to execute, it provides an incomparable wealth of feedback. In some companies, as Martin Sauer, Director of Digital for Manutan affirms, no product is released without having gone through usability testing.

Testing can be conducted internally, but equally can be entrusted to an external agency. The most important thing is to conduct the testing and thoroughly analyse the results. Not only is usability testing generally useful, digital teams are increasingly recognizing that it is an essential tool for communication and information within companies. The reliability of usability testing is thus indisputable.

Agility at the heart of UX

UX is increasingly being included in the Agile software development process. Agile development can be used to quickly correct any design flaws, allowing designers to get things wrong, go back and forth and iterate on their designs. Large-scale reworking processes and long production phases are being replaced by rapid development patterns which require UX for both a user-centered mentality and productivity.

Interfaces should be as light as feathers

When I started working in the Web in the late 1990s, the obsession was to have lightweight web pages. Internet connection speed didn’t allow for creativity or extravagance, sites had to be efficient. Since the arrival of ADSL, followed by 3G on smartphones, this obsession with lightweight pages seems to have been somewhat forgotten. It should, however, still be a major concern for app and web developers. We must keep in mind that 50% of users abandon their browsing after just 3 seconds of display time. Nowadays, almost all web pages are overweight. With too many scripts to download, poorly optimised coding, a variety of more or less lightweight media means that this crucial aspect is often forgotten. A few weeks ago, Google reverted to this idea on their blog, writing about the need to master the web diet, under the penalty of sanction (meaning deindexation). UX designers, as from the beginning, are entirely responsible for keeping webpage weight as one of their concerns.

The emergence of Voice User Interfaces

New man-device interfaces don’t often appear. In the 80s, Apple introduced the Macintosh which featured a mouse and windows. Then came, in 2006, the arrival of the iPhone, also by Apple, which created a new generation of interfaces. After this, 2015 saw the introduction of Voice User Interfaces. And with the support of Artificial Intelligence and Big Data, there is a strong chance that VUI will be incorporated in our encounters with devices. Although they are far from being as flexible as Digital Visual Interfaces, each day sees new improvements and soon VUI will become the main interfaces used in certain contexts : professional use in certain sectors, private use, use in the motor industry, for exemple, where it is less dangerous to speak and listen to a device than searching for a command button on a dashboard.

Currently in France, the first solutions are beginning to really discover their audience. This is certainly a trend to be followed, although perhaps not by diving headfirst into it.

Guest article: How to increase your conversion rate on eBay