Arnaud Lesaint joined the team in 2016 as our new Art Director. 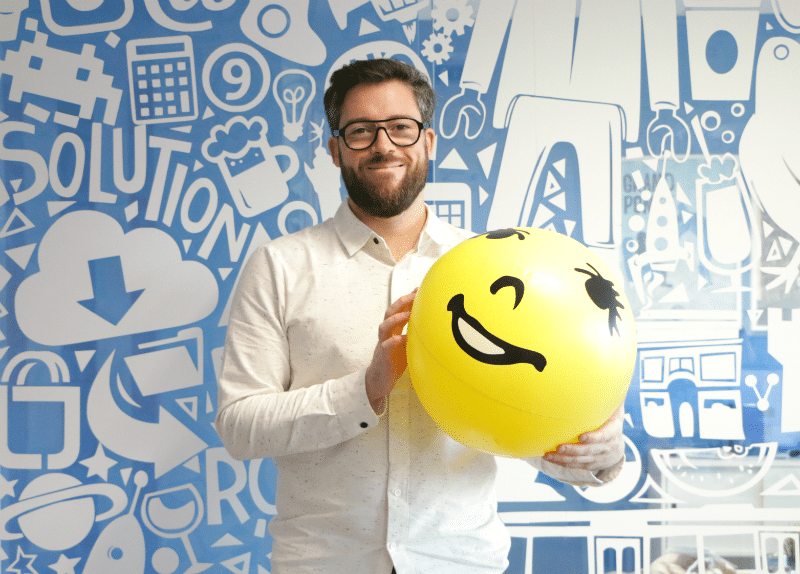 Hi Arnaud, tell us a little bit about yourself…

Like an Apple product designed in high-tech offices in California, then manufactured in dubious conditions in Asia, I was designed in Brittany and then delivered to Vendée 35 years ago. Unlike an Apple product, however, after all this time I’m not yet – I hope! – becoming obsolete. When I’m not working on Lengow’s visual communication, I damage my brain cells by taking pucks to the head (and in the net) playing roller hockey.

And how did you start your career?

I started out as a striker, but I had always been attracted by the position of goalkeeper, with all the equipment and-

I mean your professional career!

Well I never actually made it to the pros…I discovered hockey quite late, and honestly, my athletic abilities are still fairly limited.

That’s all well and good, but I was thinking more along the lines of your career as an Art Director…

Ah. Well. I had to be either naive, unconscious, or both, but first I actually went to business school. I then realised that I very much preferred the formatting of my files and presentations, as to working on their contents. The little voice in my head then helped me understand that it might be wise to consider another career. I don’t know if it was my conscience, my very own Jiminy Cricket speaking to me in my ear, or my schizophrenia, but in any case I don’t regret having listened to it.

I then started my graphic design training, by alternating work and study. In the company I trained with, I had the joy of working on really interesting and creative projects… like pen design and advertising for roadside restaurants… I joke, but really I’m very grateful to this company and its director for giving me a chance and helping me learn the trade.
I then started out as a freelancer. I worked for clients with various issues, and then worked with more senior Art Directors who helped me progress, until one of my clients, a web agency, recruited me.

After that came the freedom of leaving Vendee to go to Nantes, to work for an agency called Nobilito as an AD to develop their creative team that was started in early 2016. Then after four years, I came to Lengow for new adventures.

Well with the team already in place, I felt like we had a good chance of winning the championship, it was really-

Arno, Lengow is NOT a hockey team!

Hmm, that does make sense.
I had never had the chance to do any in-house communications, and working in an agency was really frustrating, as it meant only working on one part of clients’ visual communication. Identities and sites were created, but without continuous support or resources that were needed internally by customers, the graphic codes were quickly massacred.
I knew Lengow by name, as a big name on the French tech scene in Nantes – but their visual communication didn’t grab me. So when I saw the ad for an A.D post, I seized the opportunity. The brand had enormous potential, and there was also the possibility to ensure the development and the complete follow-up of its visual identity – in short, everything I was missing.
Then the interviews – after various exchanges, my desire to join the Lengow team grew and grew. So, I created an illustrated memory game explaining why they shouldn’t hire me, but it obviously wasn’t enough to dissuade Elodie and Mickael.

Tell us a bit about your role, and your objectives

I’m basically a guard, it’s more of an individual position whilst still playing in a team sport, and it’s quite quite demanding because-

Are you purposely trying to be annoying? Your role at Lengow…

Oh I see how it is, I’m not allowed to talk about hockey, and freedom of speech is being completely ruled out. Bravo.
Anyway… I work within the communications department. There’s about a dozen of us, and we function as a communications or PR agency, but with only one client. My mission is to think and develop the visual identity of Lengow, making sure that the image of the brand is consistent whatever the medium or the market. With Jeremy Galodé, our graphic designer, we work with lots of other teams, communications mainly of course, but also marketing, product, training and so on. We try to offer graphic solutions to their problems.

Lengow unveiled its new visual identity during the 2016 LED, did this mark a new beginning for the company?

Yes! Lengow has come such a long way since it was first started, and now holds a premium positioning that the previous graphic identity didn’t reflect. It had remained almost identical since the very beginning, and it was time to give it an upgrade. Soon after my arrival, I was able to interact with the management, the team, and the clients about their vision of the Lengow brand and better understand their perceptions and expectations. This type of project is exciting because there is so much that can be done – the scope and the possibilities are immense. We revealed the logo and all the matching documents at the end of 2016 with positive feedback. All of our tools will be updated very soon to offer a better experience to our visitors and better serve the image of Lengow!

Well, I’d really like to talk to you about roller hockey – so, it’s basically the cousin of ice hockey, and it was born in the 90’s in California and-

Ah, what a shame, that’s all we have time for. Thanks, Arno.

Interview of the Month: Mathieu Paquier, Director of Customer Success

Interview of the month: Frédéric Clément, Marketing and Partnerships Director